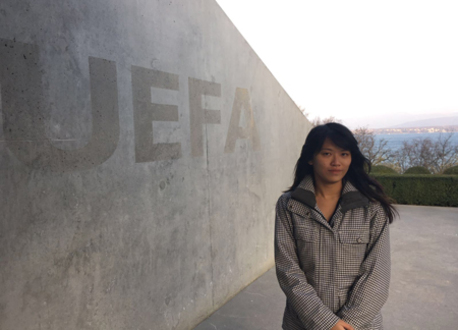 "It's been an amazing journey for me since MYP and I wouldn't have imagined this happening without them."

"Before MYP, I had completed some unpaid internships in the industry and was also applying for jobs, with zero success. I would usually get an interview but never get beyond that. I was also stuck on a route working towards production, as I had no post-production skills but I had a growing feeling that my interests lay more towards the editing side of television. I had no idea how I would get into this, since I had no experience or technical skills at that point. This is where MYP made such a huge difference to me. They were willing to take me on as a Trainee Editor, despite my total lack of post-production knowledge. They put their faith in me when I said I was keen and willing to learn, and that I would not let them down.

The MYP training also included a placement at Sky Sports, who offered me a full-time job afterwards in their post-production department, even though they were in the middle of a year-long recruitment freeze. I don't know how I would have gotten in without MYP. I stayed at Sky for a year as an edit assistant before moving to IMG to work on programming for UEFA. Now, I'm media supervisor of a team of five, and we look after all the media that goes into making three magazine shows for UEFA. I am also the edit assistant so I cut the match reviews and work on features for the programmes. As part of the job, I've also traveled to the Bernabeu Stadium in Madrid and UEFA's headquarters in Switzerland. This summer, I'll be working at the Euros 2016 in Paris for two months. It's been an amazing journey for me since MYP and I wouldn't have imagined this happening without them. My advice to anyone starting at MYP now would be to work as hard as you can to make a great season of What's Up and the rest will follow." - March 2016