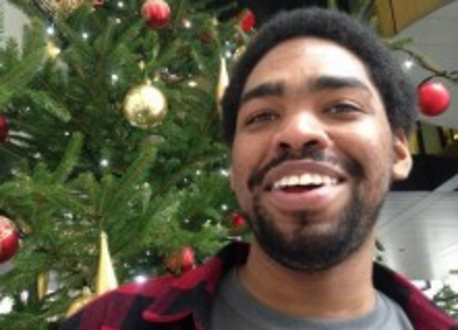 ''MAMA Youth Project showed me to not be what the world wants or expect you to be, be who you want to be.''

Before MYP I was a freelance photographer. I enjoyed it but it was a difficult job, sometimes going a month without work. For me entering MYP was like setting off on a journey by myself for the first time. Some people get excited but I was scared. I have never worked within a big team before, especially for an extensive period of 13 weeks. I was a shy and quiet person who would often have to fight myself to get out of bed each day. The first few months were a challenge because I had to mentally fight not to give up. But through my work at MYP as a trainee researcher, an assistant item producer and an item producer, I gradually begun to appreciate myself and realise I’m worth so much more. I just needed to tell myself that and apply myself to not only my work but also to the team who became my extended family for 13 weeks.

Being at the BBC has been great. I started off on a four week placement arranged by the partnership between the BBC and MYP. My bosses at the BBC then extended my contract, then extended it again to the point where I was given a full one year contract. I work with a great team and my roles consist of doing research, coming up with new ideas and even pitching new ideas. A documentary I have been working on together with a producer has just been commissioned. I was told by my boss that I was the first trainee to work on something that was given the green light in just six months! I’m also a volunteer helper at BBC Creative Briefing sessions which was set up by Danny Cohen. I love my current position at BBC but to one day I hope to become a developer or director. TV directing would be easier because I’m already in the industry but movie directing is not off the table.

Apply yourself be the architect of your life. The stressful nights, the tears, anger, and the let downs are not there to pull you back but to make you feel grateful for what you will achieve. Today’s failures are tomorrow’s successes!”

When asked where Lyle would be without MYP he said “that’s a good question,” then proceed to say how he would be “probably in an institution or something.” Without a doubt MYP did a lot for Lyle and has done this for many others as well.'' - December 2015