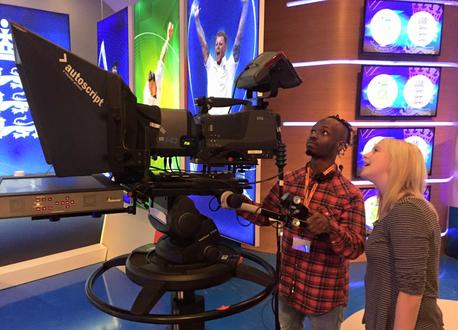 ''When I first thought about a career in media, I was on a very different path than what I am on now. I was the type of person to cruise through life, without aim and apathy towards most things, which in turn meant that I never followed things through to the end due to lack of interest and stimulation.

Because of these things I ended up bored and looking for excitement in the wrong places, with the wrong people. Long story short, things could have been a lot worse. In the end, after dropping out of my first year at university, I finished my second course in something else I didn’t really want to do. I was jobless. Then one day at my local Job Centre I saw something about MAMA Youth Project in the office, signed up as soon as I got home and since then things have only gotten better!

During my time at MYP my role was of a trainee researcher, a job that requires a lot of organisation, confidence and hard work. My experience training on the Whats Up TV programme was crazy and hard because you learn a lot about yourself and change as a person in such a short space of time. It teaches you to be adaptable; personally I learnt that I can handle anything that I focus on and in a professional manner. In the process I’ve acquired the skills to be able to create a successful career for myself.

MYP helped me learn that when you work for things in life you will see the results but you have to see the results in all the little incremental steps, not just the end goal. I have much better organisational, technical and oratory skills gained from the various and numerous professionals who came into train us and all the contributors we had to contact during the What’s Up TV production. I also learned how to handle different types of people.

After the training, MYP and Sky organised a work placement for me at Sky Studios. There I was able to have a chance at doing various different roles such as camera operator (studio, gallery and news), floor manager and editor, lighting and sound. I worked on things like the Oscar’s nomination show.

Now I am the lead runner on the film team on BBC’s The One Show. I am responsible for the majority of the technical elements with the camera equipment - i.e. knowing how all the operating systems for each individual camera works, including lenses and tripods (there are many variations, as I’m sure you will find out J). My job is to go out and record films with a researcher and a director, anything from Pokemon Go to BBC Children In Need Rickshaw challenge, from Scotland to London. I was able to apply for this job through the MYP support networks, particularly the BBC Pod, which you can access once you finish the training and become a MAMA Youth alumni.

A little message I would give if you are thinking of applying for the training is to be yourself, have character and have confidence that you can do anything and more. Just have faith in yourself and WORK HARD!'' - December 2016