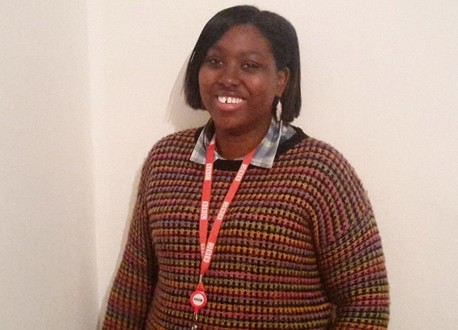 "MYP will test your strength, character and resilience but mark my words; the results are well worth it!"

25 year old Tanika Cato is from Ealing, West London. Her local job centre supported her with travel expenses during the initial weeks of training.

"Before applying to MYP I had just finished a contract in a local authority. The job was not ideally what I wanted to do or enjoyed however, I needed income to live. I found out about MYP at my local job centre. I always tried to avoid the job centre, even if it was for a very short time before I found my next contract. Looking back, I can now see it was a blessing in disguise as I would never have heard about the wonderful opportunity. After reading the flyer and hearing a MAMA Youth Project presentation about the programme, I knew immediately this was something I wanted to be part of.

I was lucky enough to fend off competition and secure a spot in the scheme. My role during my time at MYP was trainee researcher on the Comedy team. Comedy was not my first choice of genre that I wanted to work in. It wasn’t even my second. It was probably the one, out of all four genres available, that would have been most out of my comfort zone. My initial reaction was ‘oh my gosh’ but I put my best foot forward. I managed to get an item on the show (Season 8) and acted as an AP to my colleagues. In hindsight I can see being on the comedy team was the best thing for me, as sometimes we need to be out of our comfort zones to see what we can do and I managed to prove myself and my capability.

Prior to being on the MAMA Youth Project I was unhappy in the way my career was progressing thus far. Although I had been on placements at media organisations such as Sky and produced written work for newspapers and magazines, I had not secured anything permanent in what I enjoyed. I began to doubt my ability and generally my morale and confidence started to dip.

MAMA Youth acted as a new wave of self belief and showed me I possessed the skills and attributes needed to pursue what I actually wanted; which was a career in media.  MYP refined my skills in a number of areas and taught me more about the world of television, it also gave me some technical skills which I lacked and now thoroughly enjoy. Stephanie Coleman’s communication training really struck a cord with me thus pushing me back out there into the industry I longed to be in.

After leaving MYP we all gained a four week placement with the BBC. I was in the News and Current Affairs team at BBC3 acting as a Researcher for the show Is Britain Racist? I also went on a shoot with the team which was excellent. After that I gained employment at the BBC with theChildren in Need team which was a valuable experience. I worked tirelessly with my colleagues in the run up to the appeal and on the night that it was on at the London OB, Tower Bridge.

Currently, I am a Production Management Assistant at BBC iwonder. I thoroughly enjoy my job and the team I work with and as a result of this have had my contract extended until the end of the year. Not only do I work with BBC iwonder I also work at Newsnight on an ad hoc basis and will be involved with Sports Relief this coming March.

My advice to anyone thinking of applying for MYP is definitely ‘go for it’ and once you are there give it your all. Yes, the hours will be long, yes you will feel under pressure at times and you may not get your chosen genre but there is a reason the teams are selected and if you happen to be pushed out of your comfort zone take it on the chin and accept the challenge."

MYP will test your strength, character and resilience but mark my words; the results are well worth it!" - February 2016