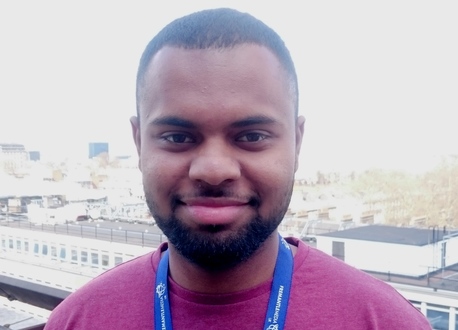 "The word 'diversity' is thrown around a lot at the moment but what Bob Clarke and other members of staff do is astounding."

22 year old Jordan is from Peckham. This is the story of how he got his first break into working in the TV Industry.

"Before MAMA Youth Project I had graduated from University studying Business Management & Media Communications and started looking for jobs in the media industry. I soon found out about the hard truth for many young people, which is “needing experience to get a job but can’t get a job to get experience.” I soon found myself going on Job Seekers Allowance (signed on on my birthday by the way!), then getting a job in a supermarket doing night-shifts, while in the day voluntarily presenting on Reprezent Radio. All while I was also looking for a paid job in the media industry.

I set myself a personal goal that I wasn't going to spend more than a year in retail. I began my time at MAMA Youth two days before my year in retail came up. I was a trainee researcher as part of the comedy team for What’s Up, which I absolutely loved as I am a comedy nerd at heart and was a stand-up comedian for a while.

I've always said that MAMA Youth is a professional and emotional roller-coaster as I felt there were so many things that happened there that I just can’t explain. But what I will say is this; you are thrown into the deep end straight away and it is worth it! Everything good in life happens when you come out of your comfort zone and MAMA Youth was just that.

The skills I gained from MYP are invaluable and it’s like a boot camp for a career in the TV Industry. You’re doing everything from making ideas, organising shoots and editing in a short space of time. It was the hardest thing I have had to do but I came out stronger than I was before. I also feel I was blessed to work with a group of like minded young people, all of us that worked on our series got really close together and became like a family. I don’t think I have, or ever will, feel that way about a group of people I've worked with before.

Once the training finished I was got a six weeks paid placement at Sky, one of MAMA Youth’s industry partners. I worked in three departments: Sky Production Services, Sky Comedy and Sky Movies. I enjoyed my placements at Sky Comedy and Movies the most, as I want to work in Comedy TV/Film and the people I met there were amazing and good people to know.

I've always said that we achieved the impossible at MAMA Youth Project. There is nothing like this in the country and it’s exactly what the industry needs as a whole. The word “diversity” is thrown around a lot at the moment but what Bob Clarke and other members of staff do is astounding.  Diversity and representing people of all backgrounds has been the key motivator for these people before it became “fashionable”.

I'm currently working as an Office Runner at Fremantle Media UK with hopes of developing in the role and eventually making great comedy content myself." - April 2016