From Poland to the UK: Joanna Barcik

From her home in Poland, Joanna Barcik, now a sound operator at Sky, had moved to the UK to go to university to study Music Technology. After completing a Masters degree, she struggled to find work. However, everything changed after she came across the MAMA Youth Project. 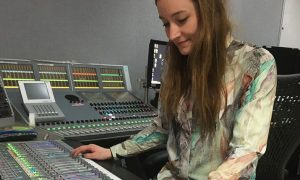 Barcik, who works at Sky across Sky Sports, as well as entertainment and cinema, attended the University of Kent as an undergraduate and postgraduate in Music Technology. Her career choices bounced from one idea to the next as she surveyed her options.

“While I was still at university,” she says, “I was thinking of going into post-production sound, but halfway through my post grad I was working as a teaching assistant while doing my Masters, and changed my mind; I thought I might go into teaching instead. At this time I was also editing podcasts for education – for students studying for their GCSE’s and A-Levels – at Audio Pi as a freelance.

“I was one of maybe four women on the course out of 50 men, so we were in the minority, and the course was also very British with hardly any international students. It felt like people didn’t think I’d get a job in any sound-related industry because I’m a woman.”

“I was offered a job as a teacher at a school in Kent after I started applying for roles towards the end of my university course,” continues Barcik. “But I realised I really did want to go into post-production sound. However, post-production sound was harder to get into than I realised it would be. I was still freelancing for Audio Pi, while I applied for numerous jobs to universities as a technician to post-production houses. I was on my job search for six months.”

During this time, Barcik discovered the MAMA Youth Project.

“I came across the trainee sound recordist role at MAMA Youth. That’s when I got really excited as production sound for broadcast had never really crossed my mind, so I thought it’d be great to try it, learn new skills and the trainee programme just sounded like a great head start in the industry. I also didn’t know many people in companies that offer sound work so I knew that would be a difficult start.” 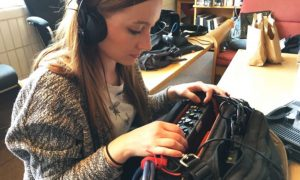 The fact she, “had never thought of going into TV or location sound recording,” is a point of consternation for Barcik, who notes, “I always thought it would have been nice to have had some input from the university on potential careers my degree could be used for, rather than everyone thinking they could be music producers”.

She goes on: “You just didn’t know there were other jobs out there. It would have been nice to know what else was there. I don’t think anyone else on my course went into TV; they ended up in post-production or technical roles in companies that deliver hardware and software for sound, and some went into live sound and recording studios.”

Back to MAMA Youth, and Barcik found herself asked in for an interview to see if she would be suitable for the coming season’s programme. Despite living in Kent and understanding a long commute would be necessary, curiosity had bitten and Barcik went for it. She ended up with a call to return for second stage interviews.

She comments: “The second stage interviews were very different, very practical, not only focusing on the technical aspects of the job but also on who you are as a person and working within a team. In the second stage interview, all the editors, camera and sound people were together. There were 15 or 20 of us and we were welcomed with a list of tasks we had to delegate amongst the group. After that there were discussions among the group, the one to one interviews. 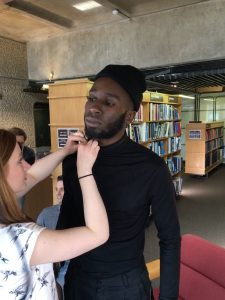 Hard at work at Sky is Joanna Barcik

“The interview process was very interesting and it made me want the job even more! I wanted to know what would happen of I got the job. But I didn’t know if I’d get it; there were a few things I couldn’t answer, or wished I’d answered differently. Bob [Clarke, head of MAMA Youth Project] called me, and asked if I thought I’d got the job. I told him how I felt I wished I’d done things differently, but then he told me I’d got onto the project!”

Into the job market

In March 2017 Barcik started on the MAMA Youth Project. She successfully completed the training, as well as helping to produce a series of the Sky 1 commissioned What’s Up show, and went onto a work placement at Procam Television. The placement at Procam was meant to be three months long, with one month spent shadowing in the warehouse, the next shadowing a delivery driver, and finally, a month in the department suitable for the trainee, either cameras or sound. However, two months into the programme Barcik got a job under contract at Sky as a sound operator.

Adds Barcik: “MAMA Youth Project definitely helped me getting my job at Sky as during MAMA Youth I got to know a few people from Sky, and I got a reference from one who also trained me during the project. It also definitely taught me how to work with other people better; it was great to be around people from various backgrounds, share ideas and teach each other.

“Also hearing from MAMA Youth staff about their experiences of working in TV was invaluable and helped me prepare for what might come next; as a female in a technical field, it can be more difficult even getting interviews for jobs as employers might assume I’m not fit for the role, whether that’d be due to technical knowledge or physical strength, and I’m sure having a foreign surname wasn’t a great help either, so having MAMA Youth on my CV definitely helped with that as it carries that great work ethic quality with its name,” enthused Barcik.

Read the full article on SVG Europe via: Click Here