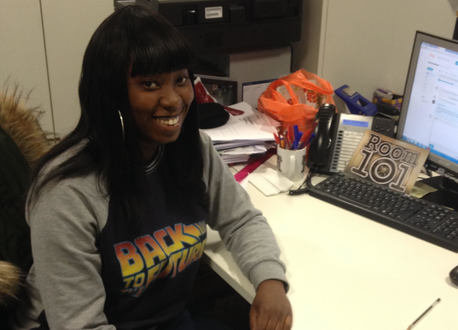 ''Before MAMA Youth Project I was painfully shy, unable to speak to strangers or even pick up the phone.''

23 year old Janay Carrott from Wood Green, is currently working at Hat Trick Productions. She graduated from the MYP scheme in November 2014. A year on, she describes her incredible journey.

"The year after I graduated was spent applying to every TV job and internship I could find. While I managed to find a work placement, it didn’t lead anywhere and I found myself back to square one. After being told by a diversity internship scheme that I didn’t have enough experience to compete with other applicants I began to wonder whether a career in television was ever going to be possible for me.

After hearing about MYP from my advisor at the Job Centre Plus, I knew I had to apply. The idea of a scheme where you were trusted to create a show regardless of your experience was too good to pass up. As a trainee researcher I was writing briefs, searching for locations and talking to talent agents.

I went into MAMA Youth Project with the hope that I would gain something to put on my CV and never imagined it would have such an impact on my confidence. Before MAMA Youth Project I was painfully shy, unable to speak to strangers or even pick up the phone. Starting several weeks after the other trainees, as I was reserve called in to replace someone who had left the scheme, I was particularly worried about my ability to fit in.  What I found was an amazingly welcoming and supportive group of people who taught me the true meaning of teamwork. No matter what, I knew I could rely on them for anything and I learnt as much from my fellow trainees as I did from the process. When I think of what we did over the course of three months, I could not be prouder.

After MAMA Youth Project, I was lucky enough to be given a placement at Talkback, an amazing company filled with amazing people. I went on location with The Keith Lemon Sketch Show. It was a surreal experience, one day I was in a Country House, the next I was in a disused hospital ward. I also spent a week doing research for Virtually Famous with a wonderful team who would go on to offer me my first job. After Virtually Famous I went on to do The Apprentice, Freeze Out and Sky Arts Sessions.

This August I received a call from Hat Trick. They had seen my CV on their database and wanted to know if I was interested in interviewing for Room 101. One year on I had never imagined I would be working on an incredible show alongside the people who have created some of my favourite TV shows.

To all new trainees I would say don’t underestimate the opportunity you have been given. The days are long and you will spend more time in Dephna House than you will your own home, but this is a once in lifetime opportunity. You will meet some amazing people in the industry who have a genuine interest in helping you and be given a level of responsibility others can only dream of. Participating in the MAMA Youth Project changed my life and it can undoubtedly do the same for you." - October 2015