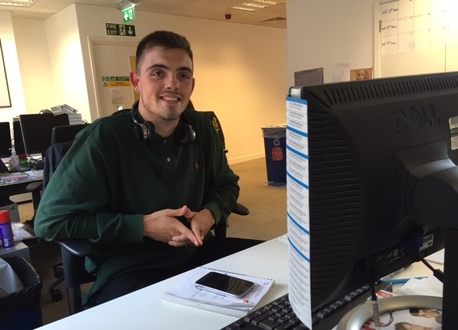 "Before MYP I was badly organised with my time and that often meant I was not realising my potential. Completing the training you suddenly realise that though you are taught plenty of editorial and technical skills it is essential you use the discipline t

Jack Bailey writes about his journey to becoming a Junior Researcher 6 months after completing his training at MAMA Youth.

"Before joining the Mama Youth Project I was working two part time jobs while volunteering at a media-related charity. I was gaining great experience, but was still unable to make the leap between unpaid to paid work. All I was ever offered were a few weeks unpaid, full-time work experience, something which puts you in a difficult position living in London. For the year after graduating University I had applied to all manner of programs and schemes and, similar to many, had faced a brick wall. When I made it onto MYP I was over the moon. I was a Trainee Researcher with the Current Affairs team. Many of the major challenges I faced were professional. The sudden weight of responsibility was at times hard to deal with, but with such a supportive team around me it made it so much easier. One particular challenge was finding a contributor for an item on substance abuse, a difficult task considering the sensitivity surround the issue. Finishing that item with an interview with a fantastic contributor was one of the proudest moments of my working life.

My experience with MYP gave me the tools to work in television. I think a big part of it for was the discipline it gave me. Before MYP I was badly organised with my time and that often meant I was not realising my potential. Completing the training you suddenly realise that though you are taught plenty of editorial and technical skills it is essential you use the discipline they instil in you. Otherwise all the other stuff is wasted.

I was really lucky with my placement at Endemol Shine. I worked with House of Tomorrow, a company started by one of my heroes within television Charlie Brooker. I had a really enjoyable time while there with my mentor, Sam Ward, ready to challenge me and teach me in equal measure. From there, I moved onto a production company called Handsome Productions, working on an MTV commissioned programme. During this time I was fortunate enough to work for a month in Mexico which was an eye opening experience in more ways than one.

I have recently moved up to Junior Researcher after being promoted while working as a Production Runner on a comedy/gameshow pilot with Rumpus Media. They have decided to keep me on working in the development team, switching between production and development as and when needed. Every day I use something I learned while at MYP.

In terms of advice for anyone starting the Project I would say: work hard, listen and say yes to every opportunity MYP offers you. You will receive some of the best training in television.”  - June 2016