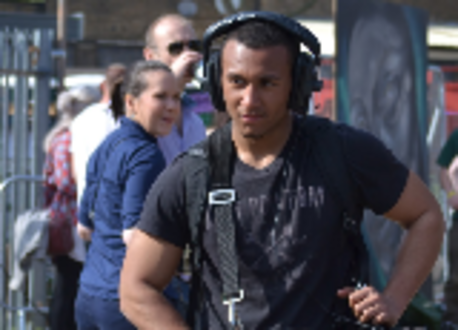 ''Before starting the training I was a very shy guy, not very confident that I could achieve what I wanted.''

"Before starting my journey at MYP I was working in a sound warehouse as a warehouse assistant, trying to get into the sound industry by getting hands on experience with the kit. My duties were to unload trucks of sound equipment prep/test speakers, prep and test cables and also to put together radio microphone racks.

Once I had worked there for a year I began to get disinterested in what I was doing in the warehouse and knew I wanted to become a location sound recordist for TV and film productions, but this was an area of the industry I had no experience in or a clue how to get into.

After a few months of trying to get into the industry I began to feel it was impossible. I started researching online how to become a sound recordist, I eventually stumbled across on twitter something called the MAMA Youth Project.  I saw that they did a hands on course where you could train as a sound recordist making a TV show called Whats Up, broadcast on Sky 1. Finally I had some hope and applied for the three months intensive. I got onto the course and was so happy that finally I could do what I wanted to get into, and learn by the industry professionals.

My experience at MYP was one of the best work experiences of my life so far. The course taught me not only a bunch of technical skills but it also taught me a lot about myself that I didn't know. Before starting the training I was a very shy guy, not very confident that I could achieve what I wanted and I was definitely less mature than when I left the course.

In the process of the intensive training you won’t realise how much you've learnt/changed until you leave and go into the industry. For me that’s when I realized that I was actually really good at my trade and did have the skills to become what I wanted to become, thanks to the MAMA Youth Project.

When finishing with MYP it was very scary but exciting at the same time. I went onto my work experience with the BBC and was being mentored by a lady called Cecilia Lawrence John, talent manager at BBC Drama. She was great and gave me some invaluable advice on pursuing the career that I want. She also introduced me to another mentor called Anthony Brown, who is a sound mixer/supervisor for the famous BBC drama, Eastenders. I would regularly keep in contact and meet up with my mentors and ask for advice, which helped me greatly.

My mentor Cecilia arranged for my work experience placement as sound trainee on the BBC drama, The Interceptor. My experience on this placement was awesome, the whole production was very exciting and they made me feel part of the team. I learnt a huge amount in a short space of time while working on the Interceptor.  After my placement finished it seemed my hard work and enthusiasm had paid of when the sound mixer Russel Jefferys asked me to stay on with him as a sound trainee. I was now getting paid working on the production throughout my summer of 2014.

I have now secured myself a 3 year contracted job as sound trainee with All About Audio, a location sound recordist crewing company who supply sound recordists to all the industry production houses such as the BBC, ITV, Channel 5, SKY, DAVE, National Geographic and more. I am extremely happy with the position I am in. Thank you to the MYP team and everybody else involved in making it happen

If I had to give any advice to a young person wanting to get into the TV industry then I would say the MAMA Youth Project is the best thing you could possible do that’s out there. Just don’t go into it half hearted thinking its going to be an easy ride. You have to be strong minded, hard working and your hard work will eventually pay off ". - December 2014