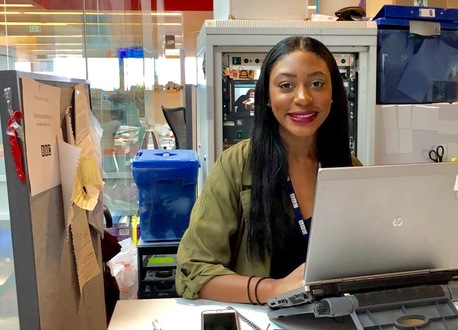 "I believe that the skills developed at MYP and demonstrating professionalism at all times allowed my contract to be extended for another 6 months at BBC Science."

Imahn Robertson-Josephs graduated in 2016 & tells us her story of how she got her first break into working in the TV Industry.

"Those Sunday nights where you worry about going to work on Monday, because you knew you were not living the life that your soul intended. This is how I would describe my working life before joining MAMA Youth. As a fashion journalism graduate, I had been surrounded by creative environments working on creative projects; however I in fact suffered from immense rejection from media organisations, which led me to end up in a role that suffocated my creativity; an office administrator in a property and construction company.

However, not with the belief that I could overcome significant challenges and eventually lead a successful life motivated me to keep striving, which led to landing a trainee researcher position within the music team on What's Up TV, the Sky1 show that is the vehicle for the training. This experience allowed me to identify and pursue my true passion, not only this but MYP gave me valuable lessons to remember for a lifetime. These comprised of, learning the dynamics of the broadcasting industry; exhibiting discretion, professionalism and diplomacy when dealing with people of different levels of seniority; coping with rejection from contributors; handling pressure;  writing imaginative briefs and to top it off; finding enjoyment in researching.

MAMA Youth enhanced my communication, organisation, planning and team working skills, all of which gave me marketable skills for the broadcast industry and has allowed me to be where I am now. I undertook a four week placement with the BBC for The One Show, as a film runner and then a studio team runner. From my skills learned at MYP, I was able to demonstrate imagination and flair in the creation of new research ideas for VT’s for the show. During my placement I was able to expand on my camera skills, which enabled me to self-shoot for The One Show. Directly after my placement, I landed a three month contract with BBC Science as a Production Runner and Personal Assistant to the Executive Producer. I have assisted on many shoots and have been fortunate enough to research on topics for programmes such as A Child of Our Time and also Horizon; and I now have my first credit with a BBC Science program. I believe that the skills developed at MYP and demonstrating professionalism at all times allowed my contract to be extended for another 6 months at BBC Science. Working at the BBC now also means that those Sunday nights have now turned into happy thoughts, thanks to MAMA Youth for opening up the door that allowed me to work for the BBC.

Advice I would give to those starting out at MAMA Youth is to really enjoy the experience, stay dedicated, stay focused, be confident in your abilities and try to absorb as much information as you can.'' - November 2016